At 401(k) Engineers, it is very important to us that you are well informed about what’s happening in the markets.  Here are a few of the key topics of conversation that we feel deserve the most attention this month. Sorry for the length of the commentary but there is a lot to discuss. If you have any questions or would like to continue the conversation, let us know, and we appreciate the opportunity. 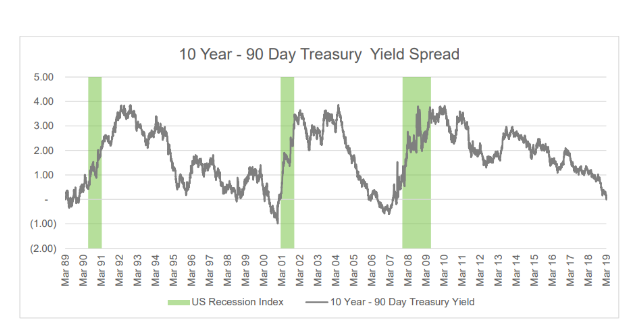 We also know that the distance between the beginning of inversion to the start of a recession typically spans a year or more. Look at the chart below which highlights the forward returns of the S&P 500.

In each scenario, the S&P 500 posted positive 1-year returns following a 10-Year to 90-Day yield curve inversion. According to Credit Suisse, Stocks rose about 15 percent on average in the 18-months following inversions. Therefore, based on the market’s past experience, moving out of equities in fear of a recession when the yield curve inverts has not previously been a high-quality decision.

What’s different now: The Federal Reserve has been artificially moving up short- term rates while market forces and global demand has kept long term rates low. In just four months, the implied probability of at least one rate hike in 2019 fell from over 90% to 0%. We must consider the artificial nature of this inversion due to Fed involvement vs. inversions that occur from more natural market forces. Therefore, probabilities are not always certainties no matter the confidence level, and we will continue to monitor all economic indicators closely. One of which is the more widely-watched part of the curve — the gap between yields on the 2-year and 10- year treasury — which has not yet inverted. Currently, the spread between the 10- year and the 2-year treasury yield is ten basis points, versus 60 basis points a year ago.

Bottom line: This piece of data is concerning, and we are watching repercussions very closely, however, this one data point does not mean we are entering a recession any time soon. We need more data to corroborate this information. In the meantime, it is possible for markets to move substantially higher. We believe staying within your normal risk tolerance allocation is the most prudent course right now.

Looking Ahead: Commonly referenced US economic indicators required additional research this month, as surface level readings of metrics such as inflation and retail sales were of better use with additional context. Retail sales showed growth in eight of thirteen major categories, with autos and gas stations skewing numbers more than other categories. Traditional CPI, which does include food and energy had not reported an increase in December or January. However, February’s numbers reported an increase of 0.2%. Core CPI, which does not include food and energy prices due to their volatility, showed a 0.2% growth during three of the past three months. As federal interest policy turned from hawkish in 2018 to slightly dovish in 2019, we will continue to keep a close eye on retail sales and inflation as an important source of data regarding sentiment from the fed. If inflation goes up, then we will anticipate the probability of an interest hike to go with it.

Bottom Line: We do not anticipate a recession in the next 6-12months. Although the yield curve is commonly referenced as a precursor to a recession, we feel as though longer rates have higher global demand which is keeping the spread close. For equities, although anticipated earnings growth has been reduced; healthcare, communications, and software focused technology companies are positioned to carry their momentum into Q2.

The views expressed here reflect the views of Brian Peardon. These views may change as market or other conditions change. Actual investments or investment decisions made by Cambridge Investment Research and its affiliates, whether for its own account or on behalf of clients, will not necessarily reflect the views expressed. This information is not intended to provide investment advice and does not account for individual investor circumstances. Investment decisions should always be made based on an investor's specific financial needs, objectives, goals, time horizon and risk tolerance. Past performance does not guarantee future results and no forecast should be considered a guarantee either. Moody's Corporation is the holding company that owns both Moody's Investor Services, which rates fixed income debt securities and Moody's Analytics, which provides software and research for economic analysis and risk management. Securities offered through registered Representatives of Cambridge Investment Research, Inc., a broker-dealer, member FINRA/SIPC. Advisory services offered through Cambridge Investment Research Advisors, Inc., a registered Investment Adviser. 401k Engineers and Cambridge are not affiliated. CA Insurance Lic. #0E44645